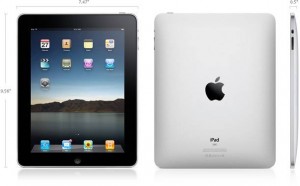 The iPad was supposed to change the face of computing, to be a

us yesterday was in fact little more than a giant iPhone. A giant

iPhone that doesn’t even make calls. Many were expecting cameras,

kickstands and some crazy new form of text input. The iPad, though, is

better defined by what isn’t there.

software, Flash. It wasn’t mentioned, but eagle-eyed viewers would

yesterday’s demo, and given that Apple clearly hates Flash as both a

non-open web “standard” and as a buggy, CPU-hungry piece of code, it’s

unlikely it will ever be added, unless Apple decides it wants to cut

the battery life down to two hours.

Who needs Flash, anyway? YouTube and Vimeo have both switched to H.264

for video streaming (in Chrome and Safari, at least — Firefox doesn’t

support it), and the rest of the world of Flash is painful to use.

In fact, we think the lack of Flash in the iPad will be the thing that

finally kills Flash itself. If the iPad is as popular as the iPhone

and iPod Touch, Flash-capable browsers will eventually be in the

One of the biggest rumors said that there would be two iPads, one with

an OLED screen and one without. But as our own Apple-master Brian X

Chen pointed out, an OLED panel of this size runs to around $400. Add

be making Apple much money.

OLED also has some dirty secrets. It may be more colorful, but it uses

(white on black text is where OLED energy savings shine). It is also

rather dim in comparison, and making an e-reader that you can’t use

outdoors would be a stupid move from Apple.

The iPad is meant to be an easy-to-use appliance, not an all-purpose

computer. A USB port would mean installing drivers for printers,

scanners and anything else you might hook up. But there is a

workaround: the dock connector. Apple has already announced a camera

connection kit, a $30 pair of adapters which will let you either plug

the camera in direct or plug in an SD card to pull off the photos.

The subtle message here is that it’s not a feature for the pros: the

lack of a Compact Flash slot in that adapter says “amateur

Expect a lot more of these kinds of accessories, most likely combined

with software. How long can it be before, say, EyeTV makes an

Apple put a compass inside every iPad, so you’d think that there would

be a GPS unit in there, too. The Wi-Fi-only models get nothing, just

like the iPod Touch, but more surprising is that the 3G iPads come

Assisted GPS can be one of two things, both of which which offload

some work to internet servers and use cell-tower triangulation. The

difference is that some AGPS units have real GPS too, and some don’t.

We’ll know which the iPad has as soon as we get our hands on one.

Update: Several readers have pointed out that Apple uses the term

A-GPS for the iPhone 3G, which makes it very likely that the GPS

capability is of the proper, satellite-navigation kind. This “Assisted

system) plus faster signal lock with assistance from cell towers.”

>From the demonstrations at the Jobsnote it appears that, like the

iPhone, we can’t run applications in the background. This will annoy

many Wired readers, but it will not matter at all to the target user,

who will be using the iPad to browse and consume media. In fact, this

user will benefit, as the lack of CPU-cycle-sucking background

processes is likely a large part of that ten-hour battery life.

windows, a text editor, a mail client and a photo editor all make

sense. If you’re reading an e-book, not so much.

Nobody really thought the iPad would have a physical keyboard. That

won’t stop the whining, though. The difference, again, between the

is a media player.

the biggest surprise (apart from the iPad’s base $500 price). In fact,

this little $70 keyboard will mean that, despite its simplified

nature, the iPad is enough laptop for many people. Why bother with a

$400 netbook when you can have this instead?

No video camera, no stills camera, and no webcam. The first two will

likely never make it into a future iPad, as we all have our iPhones or

actual cameras with us, too. But the lack of a webcam is odd, as it

closes off the possibility of using the iPad as a videophone.

I figure this is a cost-saving measure on Apple’s part. Too bad,

though, as it is the only thing that stops me buying an iPad for my

parents, whom I talk to on Skype. There seems to be no other reason

not to have a webcam in the bezel other than price. We expect to see

iPhone users hate AT&T, but the only alternative is T-Mobile, whose

coverage isn’t as good. Until Verizon switches to the world-standard

GSM SIM card, don’t expect to see an Apple product on its network. You

can forget all those Verizon iPhone rumors right now.

The iPad screen is a relatively square, by today’s standards, with an

old-school 4:3 screen aspect ratio. This is not ideal for watching

widescreen movies: you get a thick black “letterbox” bar top and

bottom. But take another look at the hardware: the Apple on the back,

meant to be used in portrait mode, at least most of the time. And a

16:9 aspect ratio in this orientation would look oddly tall and

It’s a compromise, and a good one. If you really do spend most of your

time watching movies on the iPad, maybe you should think about buying,

There will be video out, likely through the dock connector, as Jobs

to a projector. But no HDMI out? How do you hook it up to your HD

The short answer is that you don’t. The maximum audience for an iPad

screening is two. You want more? Use your laptop and hook that up, or

your desktop machine. Remember, there are two kinds of people who will

HDMI and also already own a computer that can do that.

And two, people who are buying this instead of a computer. Those

people will probably still have DVD collections, or even VCRs. They

don’t even know what HDMI is. I think I can guess what Apple thought

about putting another expensive connector into the machine just to

How could it have been better?

Here’s a list of things we felt strongly about. Post yours in the comments section below. Please keep the tampon jokes to a minimum.- No camera. Video conference calls over Skype or iChat with a front-facing hidden iSight camera would have been a killer feature. Apple did announce 30-pin connector accessories like an external keyboard, however there’s been no mention of an external video capture device. Hopefully something is in the works. I personally feel they should have held off the launch of this until a built-in camera was available. #1 feature, completely missed — and will keep many from not buying. As Spock would say, this is quite illogical.

– No phone. There’s 3G support, but no phone support? Perhaps VOIP is the answer.

– AT&T only? The love/hate relationship between Apple and AT&T continues. Why, man, why?

– Picture frame. What’s the deal with the humongo black frame? My guess is usability tests showed that it was necessary (the way users held the iPad), but it sure doesn’t look as slick as if the screen met up with the edge of the case.

– Mobile Safari still doesn’t support Flash. I suspect Apple’s mobile devices will be the death of Flash, and maybe that’s their intent? As a web developer myself, I avoid Flash or have to disable Flash for mobile devices for this very reason.

– Storage. 64GB is the best they could do? What about support for network drives, memory expansion, or even tossing in a small hard drive?

– Battery. Like all Apple products these days, there’s no way to change the battery. A trend that nobody likes except for Apple.

And finally, I’m a bit bummed that there was no mention at all about an iPhone update, or at the very least — an iPhone OS update. I realize that an hour and a half on the iPad left little time to discuss anything else–but it’s been a long while since we’ve had an iPhone or iPod Touch OS update.

§      Support for display of multiple languages and characters simultaneously

§      Charging via power adapter or USB to computer system